We know that for every adventure you undertake, there's a desire to stay completely immersed. Immersed in your surroundings, in your flight, in your aircraft. We're here to further that sense of immersion by providing top notch avionics solutions for Flight Simulator X and Prepar3D.

Starting with our KINGNAV Avionics Suite, our gauge packs will provide an in-depth, authentic experience to all of your flights. Realism is our goal, with custom programming that mimics the full functionality of the real life devices. Also, we've designed our gauges to be easy for your favorite aircraft developers to integrate into their aircraft by supplying a free SDK that includes high definition frame textures and high quality 3D models for all of our gauges

So, whether it's familiarizing yourself with real life equipment or simply recreating that favourite bush flight, NavStax will be a perfect fit for your simulator.

The NavStax KINGNAV Avionics Suite consists of 6 highly accurate and carefully replicated navigation and communication units for use as individual 3D or 2D gauges. All units feature advanced programming and custom functionality to closely match their real life counterparts, as well as detailed animation and lifelike textures. NavStax includes the following gauges, in one package, fully compatible with Flight Simulator X and Prepar3D.

The KINGNAV KX 165A combined Navigation/Communication radio recreates the functionality of the actual unit, complete with programmable comm channels and multiple operating modes including CDI, Bearing, and Radial VOR functionality.

The KINGNAV KN 62A Distance Measuring Equipment features greatly expanded replication of the real life device, with frequency selection being able to be tuned directly or remotely through a NAV receiver, emulating a functional DME Hold Mode.

The KINGNAV KR 87 Automatic Direction Finder features by-the-book functionality, with a flip-flop frequency display that allows you to switch between pre-selected standby and active frequencies with the touch of a button, as well as integrated flight and stopwatch timers.

The KINGNAV KT 74 is a fully featured mode S transponder which includes advanced functionality such as a stopwatch and timer, altitude monitor, flight ID entry and display, and an emulated ADS-B monitor with latitude and longitude display.

Is this compatible with my simulator?

The NavStax products all feature full compatibility with FLIGHT SIMULATOR X, as well as PREPAR3D V3, V4 & V5, in one single purchase.

In regards to Prepar3D: As with any simulator addon, newly released hotfixes and updates to the simulator platform are capable of breaking compatibility; we recommend being aware of this possibility and ensuring that an update or announcement regarding compatibility is available before updating your simulator.

We list all currently compatible simulator versions in our purchase section.

Is this compatible with my aircraft?

The NavStax products are designed to be compatible with any aircraft, default or 3rd party (with the possible exception of aircraft already integrating custom avionics). The individual components are available to be used as either a 2D popup gauge or as a 3D gauge placed in the virtual cockpit.

In most cases, the ability to use the components in a 3D environment within the virtual cockpit is reliant on the aircraft developer to provide compatibility. Due to this, we are making the 3D mesh, textures and underlying integration code available to ALL 3rd party aircraft developers at NO CHARGE, so if you are a developer, you are welcome to download our SDK and discuss any details with us. If your favorite developer isn't aware of our software, point them here!

What's all this about 2D and 3D gauges? What's the difference?

Gauges within both Flight Simulator X as well as Prepar3D can be represented as a flat 2D image that can be visible on your screen, moved to a preferred location, or un-docked and positioned even on another monitor. Alternatively, they can also be displayed on a specially prepared surface within the 3D virtual cockpit. This can become quite complex, as it involves extra 3D modeling, new textures, and animations for buttons, switches and dials.

At one time it was very common for gauges within the virtual cockpit to not feature any additional 3D modeling or animation. This made it easy for users to position or swap gauges. However, times have changed; it's now very common practice for developers to create their own 3D modeling to represent the surfaces, buttons and knobs on a gauge. While this creates greater graphical fidelity, it does limit the customization available to the end user. It's worth noting that often this additional detail is simply still using the default systems functionality within the simulator, meaning that while it might look like a nicer, more complete gauge, it's still subject to the same limitations as before.

An increasingly common issue that has become apparent with the rise of custom third party gauges (like ours!) is that an aircraft which users might want to use a gauge in doesn't support it. For aircraft developers, this has become a serious problem. For every gauge that users request support for in an aircraft, it adds more and more time, complexity and cost that the aircraft developer has to shoulder. We don't think that's quite right. After all, we want those great developers getting busy with a larger selection of aircraft, not wasting their time on trying to create new 3D models, textures and animations. So, we plan on shaking things up a bit!

We might not have a magic wand to instantly add 3D textured surfaces to your existing fleet of aircraft, but what we are doing to make a difference is to provide a freely available software development kit to greatly simplify life for any aircraft developer that wishes to offer 3D compatibility for our gauges. We think this offers both developers and users the best solution possible: Developers get an easy path for including a more realistic option for gauges, while users get the option to outfit their aircraft with the most complete options possible.

Are these able to run on a different computer than the simulator?

No. These units are designed to run within the simulator environment only. They are not standalone applications and therefore aren't able to be operated on a separate computer. 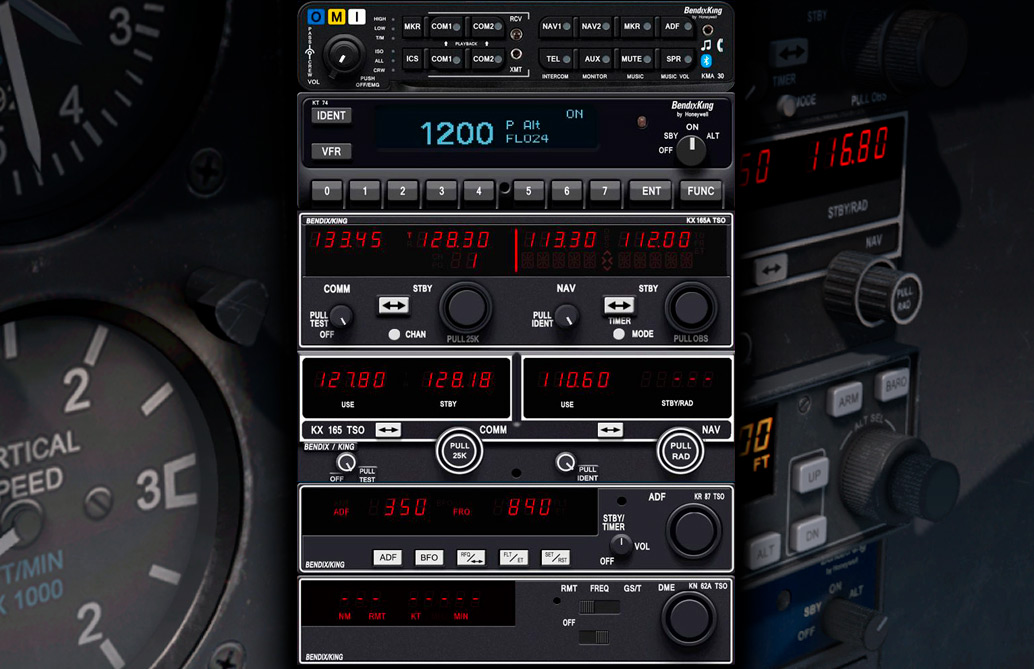 Six avionics gauges in one package: KMA 30, KX 165A, KX 165, KN 62A, KR 87, KT 74. Includes both 2D and 3D versions of these gauges, product manual, plus the NavStax configuration utility for easy installation.

Questions? Get In Touch.